Get fresh music recommendations delivered to your inbox every Friday.
We've updated our Terms of Use. You can review the changes here.

The Painter (Ambient Piece for an Art Show) 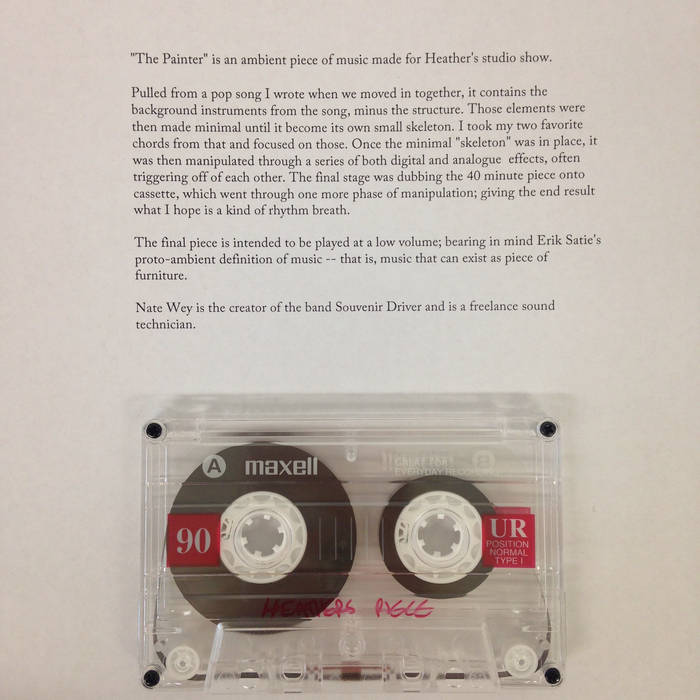 This is a 80 minute ambient piece of music made for Heather Boyd's first studio show.

Pulled from a pop song I wrote when we moved in together, it contains the background instruments from the song, minus the structure. Those elements were then made minimal until it became its own small skeleton. I took my two favorite chords from that and focused on those. Once the minimal "skeleton" was in place, it was then manipulated through a series of both digital and analogue effects, often triggering off of each other. The final stage was dubbing the piece onto cassette, which went through on more phase of manipulation; giving the end result what I hope is a kind of rhythmic "breath."

The final piece is intended to be played a low volume; bearing in mind Erik Satie's pro-ambient definition of music -- that is, music that can exist as a piece of furniture.

The bandcamp / digital release contains both 45 minute sides of the cassette, which are slightly different variations of the full piece (side a contains more "noise" and manipulation / and side b is slightly gentler, and more in line with the original).

Because Bandcamp limits the size of uploads, the pieces have been spliced into different audio files. Though the final piece is intended to be played straight through in one sitting, this slicing did allow me to separate some of the different elements of the piece.

I am keeping excerpts of the piece up for free streaming. The rest of the piece will be included as "bonus tracks" with a paid download.

Because it is intended to be just two files (side a and side b) -- feel free to request the two tracks in their entirety in the "note" section during purchase. It might take me 2-3 days to get the request out, but I will email you the full files, in either mp3 , aiff or both.

The individual files should seamlessly blend into each other. There was ONE edit made on the bandcamp version. A 10 second portion with significant digital clipping on the final cassette to digital transfer was removed.

Nate Wey is a Portland based musician, and sound mixer for television.
Previous singer of Souvenir Driver.
In 2019, he was commissioned to produce ambient music to play on a loop in the lobby of Portland skyscraper Fair Haired Dumbbell. ... more

Bandcamp Daily  your guide to the world of Bandcamp

Quelle Chris joins the show to discuss his most recent release, "DEATHFAME"